Columbus embarked on his trip on August 3, 1492 in Sanlúcar de Barrameda his journey into the unknown. He undertook a trip with the ignorance of the dangers that could be found. In the logbook of Christopher Columbus on his first trip appear two notes that account for strange situations. 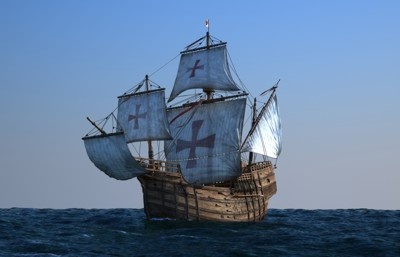 On Saturday, September 15, 1492 the Columbus log tells the text:
“He sailed that day with his night 27 leagues to Gueste and some more, and on this night at the beginning of it they saw a marvelous branch of fire falling from the sky in the sea, away from them 4 or 5 leagues”. 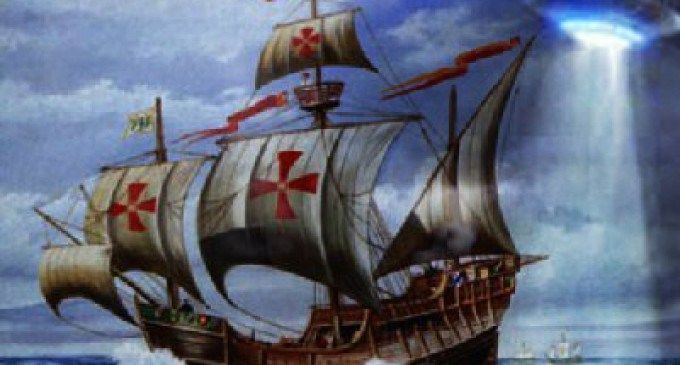 On October 11, 1492, hours before visualizing American land for the first time. Colon wrote this in his logbook:
“After the sun set, he sailed to his first road, to the west, they would walk 12 miles every hour, and until 2 hours after midnight they would walk 22 miles, which is 22 leagues and a half, and because the caravel Pinta was the best sailing and was going before the Admiral, he found land and made the sign that the Admiral had commanded.This land first saw a sailor who was called Rodrigo de Triana, since the Admiral, at ten o’clock at night, while in the aft castle, saw fire. , although it was so close that he did not want to say that it was land “(…)” after the Admiral said it, he saw himself once or twice, and it was like a wax candelilla that rose and rose, which a few seemed to be a sign of land. ”

What was that light that rose and fell in the sky? A fire lit by the natives of the island and observed in the darkness of the night? According to the Columbus newspaper, the caravels sailed at a rate of 12 miles per hour (48 Italian miles in 4 hours). When land was sighted, it was estimated that it was about 2 miles from La Pinta, after which it is estimated that Santa María followed it no more than 2 miles. That is, at the moment of seeing the light, the Santa María was 14.5 leagues from the island (80 km) away. What would completely discard the Bonfire theory, then what were those lights?

Share this…FacebookTwitterVKPinterestLinkedin 33 454 Views Biblical references to giants: Genesis 6:4 – ‘There were giants in the earth in those days; and also after that, when the sons of God came in unto the daughters of men, and they bare children to them, the same became mighty men which were of old, men of renown’. Numbers […]

Share this…FacebookTwitterVKPinterestLinkedin 10 583 ViewsMysterious Apocalyptic sounds were once again heard! An interesting cloud phenomenon in the sky and mysterious Apocalyptic sound. author of the video:: Martin Mikuaš https://www.youtube.com/channel/UCqTsbLs3EHDr7Cw4r8j88QQ With frequent observations of these sounds, I noticed that this mysterious sound can be heard before or after the bigger earthquake in the world. It probably has […]

The lost cities of Agartha and Shamballa. Do they have any connection with Atlantis and Lemuria?