The head of the company Apple claims to have seen an iPhone in a painting cca 350 years ago.

During a conference last Tuesday in the Startup Fest Europe in Amsterdam, Apple CEO Tim Cook and former Dutch politician and European Commissioner Neelie Kroes they shared an anecdote that happened the day before.

The two attended the Rijksmuseum, the National Museum of Amsterdam, when Kroes pointed to a 1670 painting titled ”A man handing a letter to a woman in a hall”, a work by Pieter de Hooch. As they watched the painting, the European Commissioner asked a Cook when they invented the first iPhone.

“By chance Tim, where and when invented the iPhone?” Said Kroes.

Cook was speechless at seeing a man in the painting holding what appeared to be an iPhone.
“It’s hard to see, but I swear it’s there!” Said Cook. “Last night, Neelie took me to see some works of Rembrandt, and one of the pictures had an iPhone in one of the paintings.” 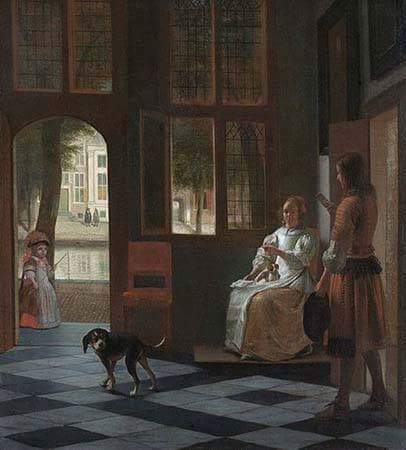 Share this…FacebookTwitterVKPinterestLinkedin 14 288 ViewsMelting ice has revealed what looks like an ancient structure buried under tons of snow and ice. Did an unknown civilization exist in the past who could have built this settlement? This crack in the ice is located at Prince Harald Coast in the Antarctic. Map coordinates to structure: 69°53’42.03″S 38°42’22.02″E Share […]

Share this…FacebookTwitterVKPinterestLinkedin 14 586 ViewsReptilians are the creation of Carian, their parent race. They evolved on a planet in the constellation Alpha Draconis in the constellation Orion. Regent lines are Draconian Reptilian, winged dragons. The name of the royal line of Aln home. It’s not spelled exactly, but it’s close. It’s more or OLN Ahln. However, […]

Share this…FacebookTwitterVKPinterestLinkedin 7 863 ViewsSeemingly orbiting the Earth for around 100 years and according to NASA that will continue in the following centuries. It would be about the discovery of the millennium, if he managed to discover another a companion of the Earth, which could be called next month. But the Earth has only one such […]