The answer to this question are not sure zoologists or scientists. Conclusive evidence is still lacking for some. Therefore, it is also in the Guinness Book of Records the longest while female anaconda snake, which was shot in 1960, and measured “only” 8.45 meters. Its weight was 227 kg and the circumference at its widest point was 1.11 meters. According to various testimonies, however, they live in the Amazon jungle other giants.

It is not just a legend? Indian legends speak of such proportions anacondas (or other reptiles?) That said female is against them as cubs! Relying only on Indian legends would probably not convinced anyone, but started getting also observed by other people.

Already at the beginning of the 20th century it studied the Amazon one of the most famous adventurers – British colonel and surveyor Percy H. Fawcett. In his diary he was found and mention of giant anacondas, who shot on the banks of the Rio Abuna. Said measured 22 meters and circumference at its widest point and had a whopping 125.6 centimeters!

Indians Fawcett also said that the forests live giant snake that say “dormidera”, which means sleeper. He was named because, as emits sounds similar to snoring. Giant species of snake kingdom Indians named again “cammodi”, by small growths on the head. Huge anaconda spotted the German missionary Viktor Heinz. In 1922 he saw a coiled snake in the forest, but which then quickly disappeared in the river. According to this giant Heinz said measured around 25 meters. 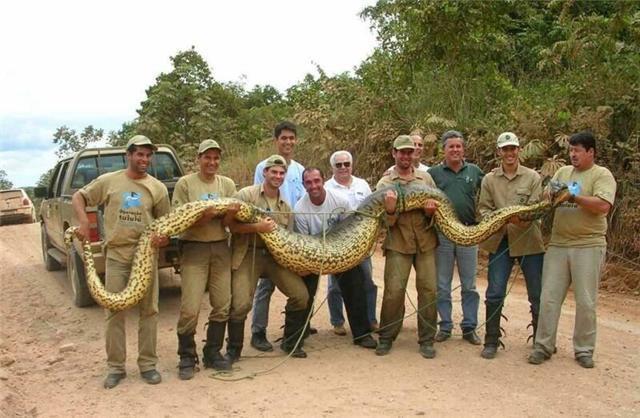 However, there are also more recent photos, among them images that made Belgian Colonel René van Lierde in 1959 of light patrol helicopters. When the harbor at the province of Katanga in the Congo (formerly Belgian Congo) against him literally “built” a huge unidentified snake. Quickly took off again and the snake was taken. The world so the photo was a huge snake, which, according to zoologists measured up to 16 meters. According to the picture but could not say what kind of snake it was.

n 2003, the world circled photo is not from Amazon, but from the island of Borneo. Images made by photographer also from a helicopter in the middle of forests. Zoologists estimate that water snake – sailed the river in Borneo, measured up to 30 meters! Some experts, however, believe that the picture is fake.

Other evidence of completely different question is from 2002, when the Brazilian dentist Jose Ronald eaten anaconda near a river Araguaia. Ronaldo jumped from the bank of the river to the interior of the Amazon forest, and when he did not return a long time, colleagues began to look for him. A few hundred meters away lie Anaconda found 12 meters long, and saw that the little grass. When this giant killed and dissected, they found that it was their friend Jose.

Some legends about giant Anacondas not even today, many people will not believe, because they consider it as a mere fiction. But what if deep in the Amazonian forests yet still experiencing some giant prehistoric reptile? Bring new evidence from Amazonia or from the island of Borneo Cryptozoology who are going there on an expedition?

Share this…FacebookTwitterVKPinterestLinkedin 7 308 ViewsKing Anunnaki?The exceptional discovery! FIND human giants in suspended animation 12000 YEARS This discovery is done completely by chance in the spring of 2008, and if we know happened is no doubt thanks to the Russian media, and television premsa. This occurs in Kurdistan, Iran, a country rather closed to the world, […]

Share this…FacebookTwitterVKPinterestLinkedin 4 668 ViewsThe Solstice is that moment when the Earth “returns” on its journey around the Sun. It represents a Shift of the seasonal energies and a celebration of LIGHT. In the Southern Hemisphere it is the longest day and the shortest night, celebrating the power of the two Suns… the Solar System Sun […]