Egyptian Archaeologist Admits That Pyramids Contain UFO Technology
Actually ancient Egyptian writings very often talk of beings from the sky, the sky opening and bright lights coming down to teach them technology and give them wisdom.

Many pictures and symbols resemble UFOs and aliens. POSSIBLY aliens built the Great Pyramid. And these solid long lasting construction techniques were adopted by the Egyptians. 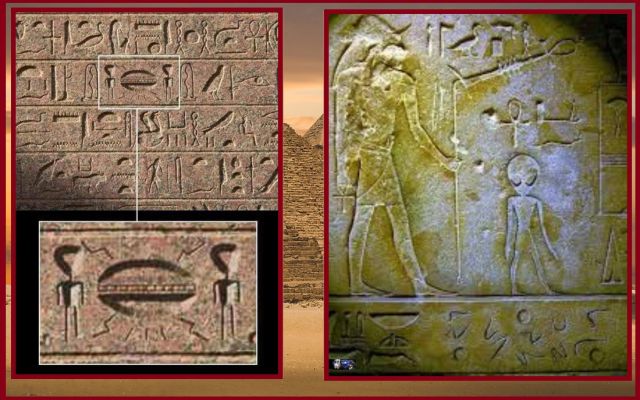 Ancient Egyptian legends tell of Tep Zepi, or the “first time”. This is described as an age when “sky gods” came down to Earth and raised the land from mud and water.
They supposedly flew through the air in flying “boats” and brought laws and wisdom to man through a royal line of Pharaohs

The Great Pyramid is believed to have been built over a 20 year span. The pyramid is so huge and so perfect that we wouldn’t be able to construct something like this in our days and age that will compare. Each giant Stone ranges from 1 to 20 tons in weight, and the Great Pyramid consisted of well over 100,000 stones.

But the Egyptians had no machinery, engines, or construction equipment. So the question still stands, who built the great pyramids?

Theories suggest the Egyptians built these pyramids, but this asks us how Egyptians hauled 20 ton stones and placed them perfectly Hundreds Of Feet high 145.75 m, 481 ft high. Some suggest they built a ramp with stones that went from the ground to the top. The flaw in that theory is that It would take More Rocks to build the ramp than it would to build the Pyramid. When the Pyramid was done, where did these rocks go? So much for that theory.

Another question is How did they move these extremely heavy rocks? Experts that insist Egyptians built the Pyramid suggest, trees were cut down and smoothed off, and were used as giant rollers under these 20 ton rocks. If you would roll a 20 ton rock on 5 trees, The tree would be too worn down and awkward to haul another, so these logs would be replaced every Stone.

Due to the fact there are over 100,000 stones that make up the pyramid, you would need an excess of a half million trees. The problem with this theory is the lack of trees in that area. Egypt grows some date trees, that’s about it. And they certainly wouldn’t cut down all their date trees, for dates are one of the main foods in EGYPT!

Now the Great Pyramid was the biggest and tallest of all the Pyramids ever built. Since the Egyptians left us an entire detailed written summary of every event in Egypt imaginable, You would think the building of the greatest Pyramid would be discussed. But it Isn’t. The Pyramid was referred to a few times in very early Hieroglyphics.

Egyptian writing suggests the Great Pyramid Was Standing Before Egyptians Populated The Land. Ancient hieroglyphics have detailed writings of farming, giving birth, Pharaoh worship, Hunting, Building Structures, etc, BUT the Building Of The Great Pyramid Was Never Mentioned. Hehe makes ya wonder If it took 10,000 workers per month over a 20 year span to build the Pyramid like experts suggest, There wouldn’t be enough people in a 500 mile radius to make this possible at all.

Actually ancient Egyptian writings very often talk of beings from the sky, the sky opening and bright lights coming down to teach them technology and give them wisdom. Many pictures and symbols resemble UFOs and aliens. POSSIBLY aliens built the Great Pyramid.

Share this…FacebookTwitterVKPinterestLinkedin 2 509 ViewsThe US FBI Investigation Office said it had evidence that our world was attending guests from other worlds. This report is very surprising – questions of this kind have never officially been interested in the FBI, and have been left skeptical about ufologists and lovers of mysteries. But, apparently, many Hollywood science-fiction […]

Share this…FacebookTwitterVKPinterestLinkedin 3 196 Views Corpuscular ship 4 June 2018 Martin Mikuaš https://www.youtube.com/channel/UCqTsbLs3EHDr7Cw4r8j88QQ Video is authentic without any adjustments! Corpuscular ship is constructed in detail in accordance with the law of God in the form of light energy. Light corpuscular ship is therefore better as a spiritual power manifested corpuscular ships. The ship can move faster […]

Share this…FacebookTwitterVKPinterestLinkedin 6 851 ViewsTexas Monthly magazine recently included the Laredo UFO Crash on a list of the eight most significant UFO cases in Texas history.Interestingly, this case is said to have occurred almost exactly one year after the more famous Roswell UFO Incident. Rumors about this case first began circulating in the 1950s, although details […]