Structure in the form of walls of some structures inside a hill with a diameter of 500 m. It was in the area of ​​the Keban dam, about 25 km from Elazig.
The place was slightly excavated by the Germans between 1968 and 1974 – archaeologists of the German Archaeological Institute conducted excavations led by Harald Hauptmann, a professor of prehistoric and early Heidelberg history. 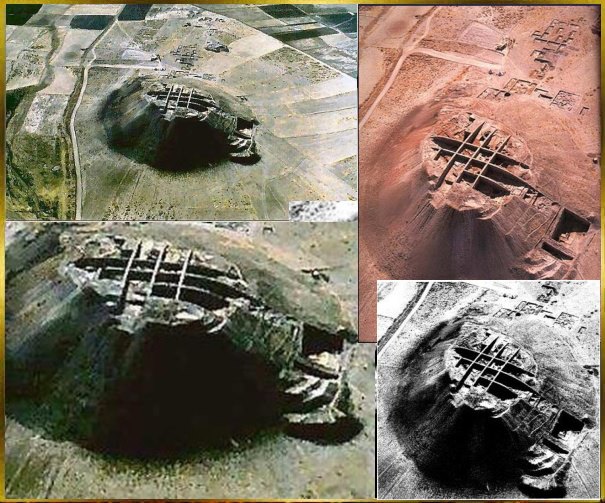 Officially: the Neolithic (4,000-3,000 BC). In the 74th Turks excavations were banned. In connection with the construction of Keban dam and the creation of water intake.

And this is all that is known about this place. I tried to find it in google maps. Unsuccessfully. It seems that these excavations were dug back.
Maybe someone will be able to identify this hill on a Google map?
There is practically no information on excavations on the network. And only a couple of more or less high-quality photos.

If these excavations are dug back – apparently there is something to hide. Similar hills in this area (while looking) found five pieces.
Where did the ground come from to cover this hill? Flood? Falling into dust storms? From space?

On this site it is said that Norsunteep is now under the water of the reservoir. Age, which gave the archaeologists this find – about 5 thousand years.
And judging by this photo, Norsuntepé is not the only one that is bombarded with a hill, where there are buildings.

Probably, many know about Göbekli-Tepe. Whose age archeologists determine at least 8, or even 12 thousand years. Western historians – great love of
The fact that these columns were found in layers of abiogenic soil is a fact for me. They were fixed by the rubble stone, in which they were due to the forces of the cataclysm.

Share this…FacebookTwitterVKPinterestLinkedin 7 572 ViewsHumanity does not come originally from Earth, but from the area of Sirius, which have been created race of advanced civilization or for the fight. the protection of this civilization, which, although advanced lost the ability to defend itself against the aggressor. These races were genetic manipulation adapted to fight, were bred […]

Tisulsky Princess — Girl in a Casket — Age of Burial According to the Professor Is at Least 800 Million Years Old!

Share this…FacebookTwitterVKPinterestLinkedin 9 121 ViewsTisulsky Princess — Girl in a casket  Age of burial according to the professor is at least 800 million years old! In the near future, russian scientists publish their findings, and that the scientific world will plunge into shock. Age burial, according to the professor, at least 800 million years old! This refutes […]

Share this…FacebookTwitterVKPinterestLinkedin 12 468 ViewsIncredible! Hybrid human creature? Cobra Man! Mysterious creatures are real? World folklore is inhabited by a large number of amazing, fantastic animals. In different cultures, it shall be assigned incredible qualities or abilities. Despite the diversity and otherness, all mythical creatures have different assessment – there is no scientific evidence of their […]