The supposed extraterrestrial ship has appeared again during an observation to the constellation of Orion.
As we informed you previously, on November 29, 2017, while an observer from the sky of North Carolina (USA) was collecting data about the Orion M42 nebula with its Newtonian Telescope, he managed to see a giant cigar-shaped UFO on the screen of your laptop that you captured in a single frame of 30.2 seconds. 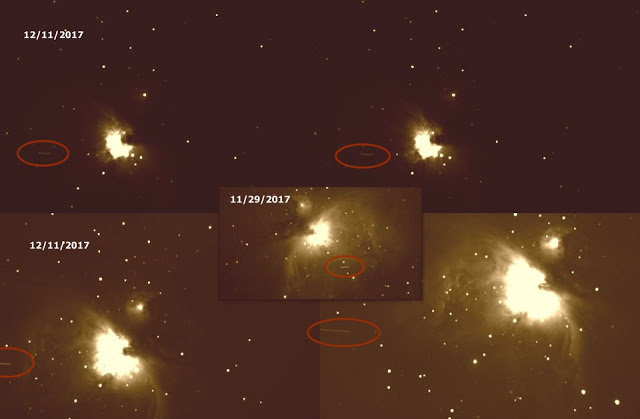 Now, on December 11, 2017, when the witness again observed the Orion M42 nebula, he could see an object also in the shape of a cigar from the third frame, but the object did not appear in all the frames that were taken even with different exposure. This could suggest that it moved very fast through space.
The fact that within two weeks the sky observer has captured an object that is similar in shape and size can no longer be a coincidence.

Also, if you compare the location of the object on November 29 with its location on December 11, you will see that it has moved to the other side of the Orion Nebula, which is a strong indication that it could be an interstellar ship that is currently being moving around the same place in outer space.

A case reported twice in such a short time and showing a supposed cigar-shaped ship moving is already very suggestive and strange. Are we facing an evidence of the existence of extraterrestrial civilizations traveling through space?

Share this…FacebookTwitterVKPinterestLinkedin 3 686 ViewsVrkolak: Bulgarian Werewolf A farmer in a small village in Macedonia is digging up a new part of his field when the plow hits an object. It’s a box that’s chained shut. Being brave and curious (and probably hoping it contained gold or something that might get him his own reality show), […]